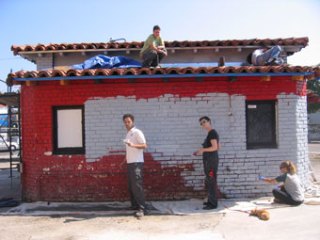 Austin Mader-Clark of Autopia Biofuels has teamed up with two other biodiesel station owners to promote the alternative fuel.

Austin Mader-Clark’s new fueling station and convenience store in San Mateo is in the red, yet she makes time to confer with her competition weekly. That collaboration is critical to the success of the fledgling industry, she said.

“We see each other as infrastructure,” said Mader-Clark, who opened Autopia Biofuels in May. “If people aren’t using biodiesel, it can be hard to get them to start. But if they know biodiesel is available everywhere they go, more people will start using it.”

Michele Swiggers, co-owner of Dogpatch Biofuels, said she has never encountered this level of cooperation among competitors.

“It helps make everyone stronger,” she said.
Buying in bulk

In recent weeks, biodiesel has been priced competitively with petroleum-based diesel, both hovering between $5 and $6 per gallon. Customers have traditionally bought biodiesel for environmental reasons, but the price parity is expanding the market to first-time customers looking to save money, Mader-Clark said.

Autopia Biofuels sold 3,000 gallons in its first six weeks but will need to sell 10,000 a month to break even, Mader-Clark said. She added a convenience store with organic snacks and products to boost revenue.

Costs are high in the new industry because suppliers are facing start-up expenses, Mader-Clark said.

One of her suppliers charges $2,200 to deliver any amount of fuel, so local stations sharing shipments could mean lower prices for the consumer, she said.

Currently, there is only one government-approved fuel dispenser for pure biodiesel use, and it costs $11,000. The trio is trying to negotiate with a different manufacturer to obtain approval for a similar dispenser that costs less than $3,000.

“We approached the manufacturer and said, ‘There’s three of us in the Bay Area willing to buy your dispenser. Can you put money forward to do testing to get it certified?'” said Swiggers, whose station is still in the permitting process and is looking to buy two dispensers. “They were quite receptive.”

The stations also help each other navigate state and local agencies, said Melissa Hardy, one of the five worker-owners of BioFuel Oasis, which is moving to a bigger site in the fall.

“Dogpatch shared a lot with us about the building-permit process,” Hardy said. “We chose a lot of the things they used so no one’s reinventing the wheel.

The three stations sell biodiesel made from used cooking oil, which is chemically treated and filtered before use. Pure biodiesel is nonflammable and reduces harmful emissions of hydrocarbon and carbon monoxide.

Swiggers said many consumers confuse biodiesel with corn-based ethanol, which can negatively affect carbon emissions and the global food supply.

One of the first steps to establishing a market, she said, is explaining who can use the fuel.

Pure biodiesel can invalidate some vehicle warranties, but many vehicles built since 2000 don’t require modifications to use it. In older vehicles, its solvency can corrode rubber fuel lines and loosen deposits that clog filters. In cold weather, biodiesel can form wax crystals and reduce fuel economy.

Used cooking oil is one of the best fuels for the environment, but it’s on the fringe of the biofuel industry because many consumers don’t understand its benefits, said Jon Guice, head of research and co-founder of AltaTerra Ltd., a Palo Alto-based research firm focused on green business and cleantech.

Area biodiesel stations are more likely to build a market for their products if they consolidate efforts to educate consumers, Guice said.

“Biodiesel is a very new, very nascent field,” Guice said. “Collaboration makes perfect sense to me. It is much more likely to take off as an industry if there are more of them, and there will be more of them if they can make the price and logistics work.”

Berkeley’s BioFuel Oasis opened nearly five years ago and has found some success, Hardy said. The station is profitable and will move from its small, warehouse site into a historical filling station on Ashby Avenue in the fall.

As business grew, members of the cooperative discussed ways to encourage more drivers to use biodiesel. The simple answer was more filling stations, but the owners didn’t want to open other Bay Area locations, Hardy said.

“This is our community. It’s where we want to run our business,” Hardy said. “No one wanted to open a franchise elsewhere, so we discussed what we could do to support more stations to open without being in the traditional business model of franchising.”

BioFuel Oasis held a weeklong class in February 2007 to teach 12 applicants how to open biodiesel stations in areas outside Berkeley. The only student to open a station so far is Mader-Clark in San Mateo.

Patrick Cook, director of the Silicon Valley Small Business Development Center, said this collaboration is necessary for the stations to survive initially, but the cooperation could become counterproductive when the market reaches critical mass.

Hardy said that time is still far away. BioFuel Oasis is planning another how-to class for potential station owners next February and is encouraging new waste vegetable oil plants to open to meet the growing demand.

“There’s not enough waste vegetable oil to replace the fuel for every diesel engine that’s running on petroleum diesel in the country,” Hardy said. “Biodiesel is a transition fuel. We are looking at this as one solution among many, such as encouraging customers to drive less, to bicycle and to localize their lives.”

Searching is in progress